The special of the DSP2TR2A is to switch and control LED supplies and other electronic ballasts with high momentary inrush currents.

The problem to be solved is the summary of high inrush currents of several ballasts which should work at one AC Line.

The DSP2TR2A is able to do that by switching at zero cross state and using a precision timing between electronic and mechanical relays.

Because of this feature of the two potential free switches the DSP2TR2A is able to bring more ballasts / supplies online at a 16A circuit breaker as it would be possible without reducing of momentary inrush currents.

In case of ON signal to both switches at the same time there is a fix delay of approx. 30 ms between K1 and K2, so they never can switched into the on state at the same time. The two additional 0-10V outputs for a direct control of dimmable ballasts are able to source and sink currents up to 50mA.

A further special is to store a complete DMX512 Frame (scene) into the DSP2TR2A. In case of a DMX failure or without DMX this scene is able to control the switches and the 0-10V outputs. 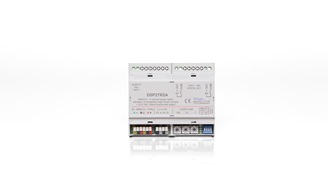 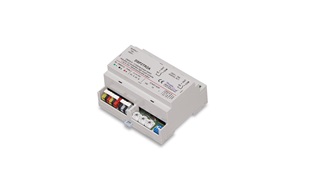